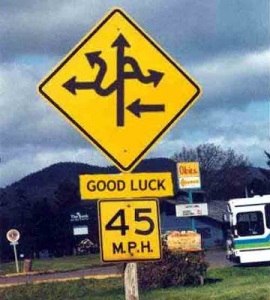 I know, I mentioned that before, but it’s a good opening. Having already talked about cats at the first Christmas, I’m reusing the opening to talk about our first Christmas with Nuggy. 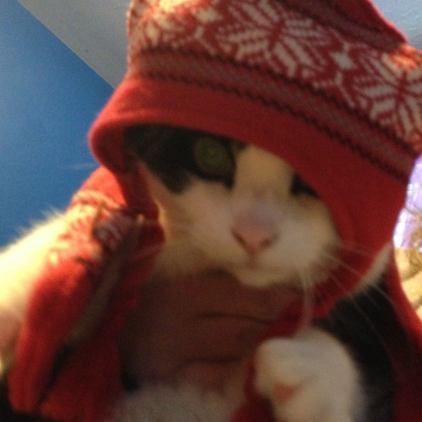 It was 1999, and my wife and I had just bought our first house that August.  Nuggy moved in during September. Before getting too far into the holiday season, we found out we were going to have our first child.

Then the real fun began.

We told my mom and Christine’s parents we were expecting. Then the rest of the relatives. My brother and his wife just told us the week before they were expecting, also.

One day I came home from work, and Christine told me we had to get rid of Nuggy.

“Because my mom said he would try to eat the baby.”

I was speechless. Where did that come from? My guess was too many Stephen King movies.

Needless to say, Nuggy stayed, and Christmas Time was soon upon us.

Nuggy enjoyed the decorations. The Christmas Tree was something new and interesting. It was artificial, but that didn’t stop him from wanting to check it out. And occasionally chewing on it. I think he liked seeing his reflections in the different ornaments as well. As the years passed, Nuggy would enjoy taking long winter’s naps under the tree, curled up by the nativity scene, or just enjoying the tree skirt in general. 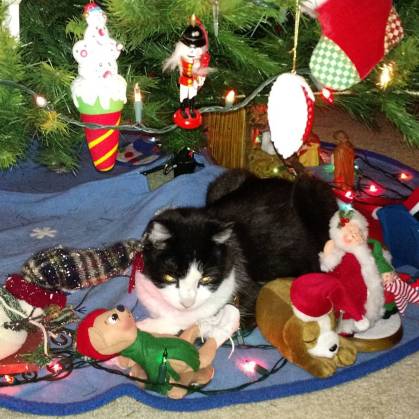 The first year, though, Nuggy wasn’t happy just staying under the tree.

One December morning, while we were getting ready to go to work, Christine called me into the living room. She was looking at the tree. There, on a mid-level branch, among the lights and flanked by Coca Cola and Darth Vader ornaments, was Nuggy, perched like a leopard. With his big eyes wide open, he looked back and forth between us as if to say, “What?”

We got him out of the tree without much damage or disruption. There may have been a couple of squirts from the water bottle afterward.

Christina asked, “How do we know he’ll stay out of the tree while were gone?”

I was happy the squirt bottle was enough of a deterrent, at least until that evening. It was, but not for any longer.

That night, a few minutes after we went to bed, we heard a couple of the ornaments jingling.

After a couple of more minutes, we heard the tree crashing to the floor, a few ornaments rolling around on the hardwood, and Nuggy scampering through the kitchen and down the basement stairs. 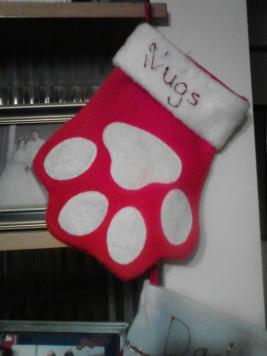 wrapping paper balls to bat around the house. We had a stocking for Nuggy. Santa would bring him a few packs of treats and some new catnip fur mice. Nuggy’s stocking was the usual red felt with white fur trim, but it was shaped like a paw instead of a human foot.

My mom would come over with breakfast, which meant someone else to cuddle with and throw paper balls and fur mice. As the years went by, two more kids joined us for even more Christmas fun.

I think Nuggy enjoyed the holiday smells as well. Between candles and decorations and baking and cookies, there is always a new scent to enjoy.

home to stay.  She shared his stocking and quickly learned the joys of napping under the tree and batting wrapping paper balls.

And most importantly, she never climbed the Christmas Tree.