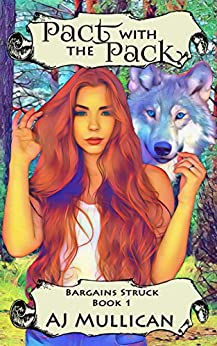 Plenty of hot sex and a good story linking it all together.

Transparency: I received this e-book as an ARC from the author for review purposes. “Pact with the Pack” is also available in paperback.

After surviving one murder attempt by her ex-boyfriend, Cherry is rescued from a second attempt by a pack of wolves and is hiding out in a house in the woods. Then the real fun begins in this paranormal romance – reverse harem – wolf-shifter tale by independent author A. J. Mullican. I gave the book four stars. “Pact with the Pack” is the first book in the Bargains Struck series, and it’s a great story. I’m just leaving room for growth.

What I liked:
The story is told from Cherry’s first person POV. It didn’t take long for me to get used to this. Cherry is tough and strong, but through her narration, we get to see her self-doubts, concerns, and fears. We also get her thoughts on each of her rescuers. This results in Cherry being a well developed character. A lot of the action takes place off-screen, but we get a good idea of what happened after the fact. And honestly, I wasn’t reading it for action scenes, although the action scenes we do get are pretty good.

There is plenty of sex in the book, all from Cherry’s point of view. I know, why else would you read the book? The point of view is refreshing for me, a male reader who usually doesn’t stray far from science fiction and fantasy. Throughout the course of a couple of days, Cherry finds herself alone (usually) with each of the brothers. Each scene is as different as each of the brothers. And each scene is HOT.

In closing, get this book. There’s plenty of steamy sex, and a good story linking it all together. Then follow A.J. Mullican and keep an eye out for the next book in the Bargains Struck series.

This review was also posted on Goodreads and Amazon . Go check them out and give a like and a comment. Spirited discussion and constructive criticism are always appreciated.

This is what happens when bad people get superpowers.

Victor Vale and Eli Cardale were friends and roommates back in college. Together, they discovered how to grant themselves superpowers.

Eli thinks Extra Ordinaries (EOs), the term used for super powered individuals in Eli’s thesis and the news media of the day, are wrong. He starts to hunt down other EOs to kill them. Victor is out to stop Eli because he finally wants to see Eli fall. In Victor’s mind, if Eli is the hero, he must be the villain. “I can live with that,” Victor thinks. Victor is fueled by pride and jealousy and the idea that he’s “no fucking sidekick.” Others, both regular and Extra Ordinary, are dragged into the battle, leading to a conclusion that is complex, exciting, and pretty damn entertaining. END_OF_DOCUMENT_TOKEN_TO_BE_REPLACED

Kindle version will be released July 9, 2019.
Some extras not included in the Amazon and Goodreads version of my review.

“Chasing Danger” is an enjoyable read. I find the idea of fantasy-noir intriguing. Magic and magical creatures in a old time detective setting didn’t seem like a natural fit, but White pulls it off like a dress on prom night. I have a few extra thoughts, but first, here’s the review I posted on Amazon and Goodreads.

Chasing Danger: The Case Files of Theron Chase by Richard C White
My rating: 5 of 5 stars

Word on the street says “Chasing Danger: The Case Files of Theron Chase,” is the cat’s pajamas. A real pocket full of firecrackers of a read.
It was a slow day. I was cooling my heels at my desk, looking for an excuse to spend the evening reading. Outside my window, it was shift change in the city. Day shift was going home to their everyday lives and the night crew was coming in to take over. It was time to lock up and go nose around, maybe drum up a little business.
My Kindle buzzed. Seems I had a delivery. I clicked open and there it was. Sleek looking cover, the type that makes a man want to open the book and read it. A lot of women, too.
But, what’s this? Fantasy Noir? You gotta be kidding me.
White isn’t kidding, and “Chasing Danger” is no joke.
From the very first line, you feel the scene turn black-and-white. It doesn’t last long, for White doesn’t waste time showing that Calasia isn’t your typical gumshoe story town. There’s magic in those alleyways.
A collection of four stories that are probably best read in order. At the very least, “The Full Moon Affair” should be read first. A good story, but it also introduces Theron Chase, the supporting cast, and the city of Calasia.
Theron Chase is a straight shooter whose reputation precedes him wherever he goes. Even the bad guys respect him. He likes Scotch, always a plus in my book, and he’s non-magical. In fact, magic has a tendency to malfunction when he’s around. This is an excellent choice by White. The focus on his detective skills helps balance the fantasy aspects of the stories, keeping the Noir in Fantasy Noir.
There is a decent sized supporting cast, and none of them are throw-aways. They all have a part to play in each case, and White makes good use of them all.
Full disclosure, I received my copy for review purposes, but I would purchase a print copy for myself and gift giving.

View all my reviews

I gave “Chasing Danger” five stars. The rating is well deserved, but I can’t help hearing a voice in my head saying, “People don’t trust five-star reviews.” I got over it. Seeing as I was the first person to review on either platform, I figured others will just have to deal with it.

Once I started reading a case, it was hard to put down. I had to resist the urge to make popcorn while reading. The stories pull you along, so, make sure you have time to finish.

On a similar note, I kept hearing music as I read. Mostly “Harlem Nocturne,” from the Mike Hammer TV series, and the soundtrack to Police Squad. White’s words pulled me in that much. Immersion is the word I’m looking for, I guess. I didn’t include this snippet in the other reviews, because I didn’t want to sound like a crack-pot and hurt the book sales.

The Kindle version comes out July 9th, with paperback soon to follow.

Reading outside of my usual genres and getting over myself.

I decided to read a genre I’ve never read before: Romance.  I cheated a bit, and went for Paranormal Romance, which, I think is another way to say Fantasy.  I guess paranormal is used to avoid confusion.  Fantasy means swords and sorcery, but Fantasy Romance is redundant.  I guess.  What the fuck do I know?  Then there is Contemporary Fantasy, and Urban Fantasy, which might mean the same thing.  I don’t know.  I’m not claiming to be an expert.

was no shortage to choose from.  A lot of the paranormal romance authors seem to specialize in either vampires or dragon shifters.  Lots and lots of dragon shifters.  I mean, you can’t even swing a dead werewolf and not hit a dragon shifter.  And if there are vampires, werewolves aren’t far away.  Not that there’s anything wrong with that.  I can see the romantic potential of all three species, but, if I was going outside of my Sci-Fi/Fantasy comfort zone, I wanted to go all the way. END_OF_DOCUMENT_TOKEN_TO_BE_REPLACED

This started out like a Hallmark movie, but got dark quick. Could easily be an opening scene, maybe even on Hallmark.

‘They’re from the garden dad. We still plant them just like you used to. Around the edge of the patio. Remember?’

It was unlikely he would. Geoffrey Simms had dementia. Slumped in the care home high-backed chair he gasped, dragged air into his lungs. ‘Your mum …’

‘Mum?’ Jenny was six years old when she left. Ran off with another man they said. The fragile fragrance of the sweet peas must have triggered a memory, she thought.

‘Dad, please tell me tell me about my mum.’

‘The patio. I buried her under the patio.’